What are you looking for today?
Insomnia

byZuza Roguska December 2, 2021 0 comments
HomeInsomnia PMS and Insomnia – How to Fall Asleep Before and During Your Period 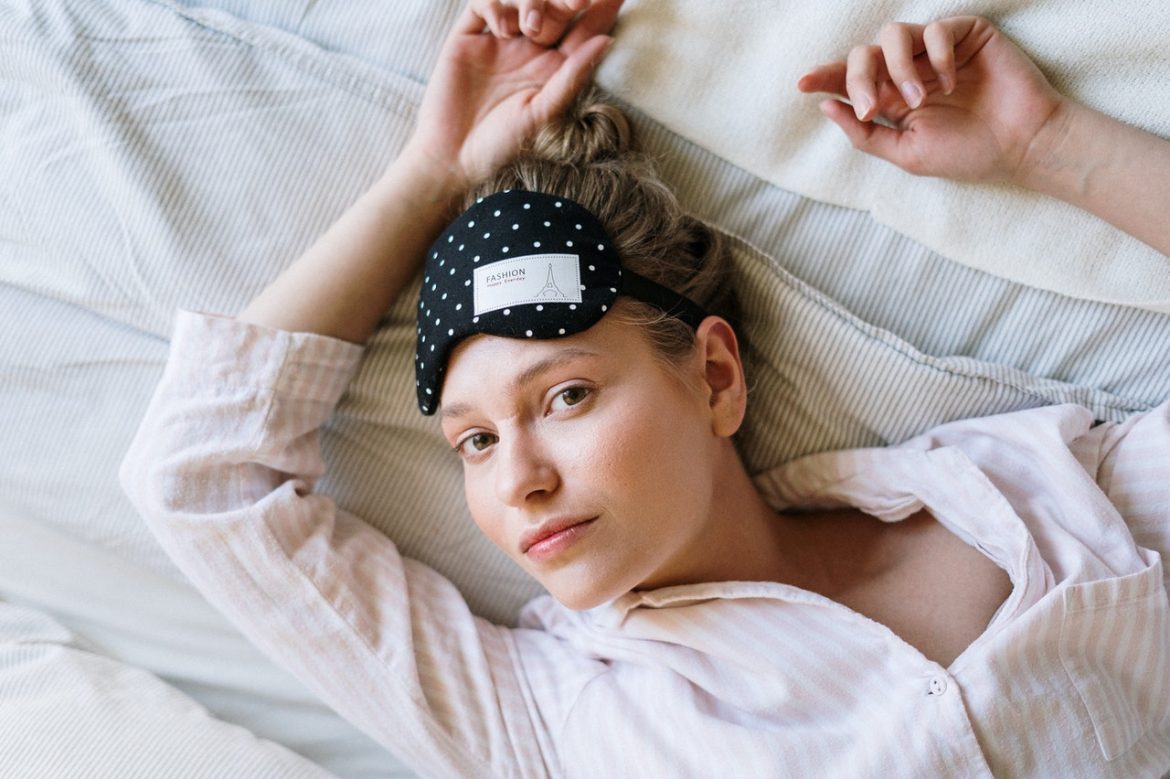 Sleeping difficulties are prevalent in the United States, with up to 35% of individuals reporting symptoms consistent with insomnia. Women are more likely than males to have sleeping problems. One possible reason is hormonal fluctuations during the menstrual cycle.

Women frequently report physical and emotional changes and modifications in hormone production during their menstrual cycle. These variations are modest for many ladies, but for others, they are disruptive and lead to premenstrual syndrome (PMS). In addition, they can induce premenstrual dysphoric disorder when severe (PMDD).

Women with PMDD and PMS often sleep too little or too much, and women with minor symptoms may be tired or have trouble sleeping.

Sleep difficulties are a common occurrence, especially during the premenstrual phase. Unfortunately, the precise reason for these sleeping issues is unknown. Still, considering how crucial sleep is to both physical and mental well-being, it’s critical to understand the link between the menstrual cycle and sleep and how to rest effectively during your period.

What to Do When You Can’t Sleep?

Basics of the menstrual cycle

An average menstrual cycle lasts 28 days, with changes induced by rising and falling levels of hormones such as estrogen, progesterone, follicle-stimulating hormone, and luteinizing hormone.

What are the phases of the menstrual cycle?

The menstrual cycle has four stages:

Menstrual phase: The first day of monthly bleeding, often known as your period, marks the beginning of this phase. The lining of the uterus that developed in advance of pregnancy is shed during this period. It lasts around five days on average.

Ovulation phase: During this phase, the mature egg is released by the ovary during the ovulation period. It happens on day 14 in a 28-day cycle.

Luteal phase: This time is known as the luteal phase, and it lasts roughly two weeks after ovulation. When a woman does not get pregnant, her luteal phase ends with menstruation and the start of a new cycle.

According to some resources, the menstrual cycle is divided into three phases, and the days of menstruation are regarded as part of the follicular phase.

Change in hormones during the menstrual cycle

Changes in hormone production cause the menstrual cycle to repeat itself. Estrogen and progesterone levels rise during the follicular phase and after ovulation, but they fall considerably in the last days of the luteal phase if pregnancy does not occur.

Changes in your body before the period

According to a recent poll, roughly 90% of women notice some physical or mental changes up to their period. Changes that may occur:

Pregnancy symptoms can begin ten days before your period and last anywhere from a few hours to a couple of days. They might dissipate shortly after your period starts or persist for several days afterward.

Though almost all women experience some changes before their period, they are frequently minor and fleeting. In addition, changes in type and severity can vary depending on time, place, and cycle.

What are PMS and PMDD?

What are PMS and PMDD?

Premenstrual syndrome (PMS) is characterized by severe and unpleasant symptoms that appear in the days preceding your period and continue throughout menstruation. The severity of PMS varies from person to person. However, some women with PMS report that the symptoms interfere with their daily routine and activities.

Premenstrual syndrome, or PMS, is a severe illness with at least five symptoms that include substantial emotional changes. PMDD can cause more significant difficulties at school, at work, or in social and family life.

Pregnancy-induced nausea and vomiting (PIM) is a condition that affects approximately 12% of pregnant women. In most cases, the typical symptoms are moderate, although PMDD affects between 1% and 5% of all female patients.

The frequency of PMS or PMDD varies throughout a woman’s life. However, they are most prevalent between 29 and 39, with the most severe symptoms surfacing in people in their late 30s to early 40s.

At some point in their life, many women will experience PMS. According to specific sources, around 75% of females will have PMS symptoms at some point during their lives.

PMS is linked to a variety of sleep difficulties. For example, PMS women are at least twice as likely to have insomnia before and during their period. In addition, sleep deprivation may lead to daytime tiredness or drowsiness around the time of the month.

PMS may cause some women to sleep more than usual. In addition, fatigue and tiredness around their period and mood swings such as sadness might lead to oversleeping (hypersomnia).

PMDD is one of the most challenging types of mood disorders to diagnose. PMDD is marked by severe emotional and physical symptoms that appear 4-8 weeks before a woman’s period begins. These problems can be bleak if they persist beyond a month, as around 70% of women with this condition have insomnia-like difficulties before their period, and over 80% feel tired.

The effect of PMS on sleep

Researchers are still unsure why PMS causes sleep problems; nevertheless, there are several possible reasons for this symptom.

Women with premenstrual syndrome (PMS) can have a more challenging time falling asleep, as well as more wake-ups when their hormone levels change. In addition, compared to other parts of the menstrual cycle, sleep quality deteriorates during the late luteal phase (when PMS occurs).

Hormones before and during menstruation might disrupt sleep through effects on body temperature and melatonin production. Progesterone, which rises throughout the luteal phase until ovulation, raises the body’s temperature to a point where it can cause disrupted sleep. Melatonin levels are altered during the menstrual cycle. It is a hormone involved in circadian rhythm and regular sleep habits.

Although the findings have been mixed, some researchers have suggested that women with PMS experience altered sleep architecture, which means they move through phases of the sleep cycle at an accelerated rate. For example, during the late luteal phase, some women have been discovered to have less rapid eye movement (REM) sleep. REM sleep is characterized by increased brain activity and is associated with vivid dreams. Even in females who do not experience PMS, these changes to sleep architecture may occur.

How to Treat Insomnia

Before their period, some women have more rapid hormone swings, linked to more disrupted sleep. The concept that sleep disturbances are caused by the hormonal changes themselves and the rate at which they change might help explain why women’s sleep experiences vary so much before their period.

Another essential element to consider in premenstrual sleep issues is mood swings. For example, PMS can cause anxiety and sadness, both of which are linked to sleeping difficulties. In addition, these mood swings might cause women to believe that they have a more challenging time falling asleep or are getting up less refreshed.

Between 14% and 19% of women suffer from heavy periods, which entail significant menstrual flow. Today’s baby girls may be more worried about bed-sharing, and one option for preventing this is to move their crib out of the room where they sleep. They may have to get out of bed to change pads or tampons, which might cause them additional worry about sleep and possible nighttime mishaps that could stain their sheets or mattress.

Tips for better sleep in different phases of the menstrual cycle

The days leading up to your menstrual cycle are when sleeping difficulties most often occur. Regular exercise, a balanced diet, relaxation methods, and lots of water consumption might help you feel less stressed and cope with PMS better.

Medicines and nutritional supplements may be used in case of more severe symptoms of PMS and PMDD, which can help you get a good night’s sleep. In addition, light therapy, which uses a bright light to alter the circadian rhythm, might help some women with PDD.

For any woman dealing with annoying PMS symptoms, such as sleeplessness, it’s critical to consult a physician who can explain the benefits and drawbacks of various therapies.

During and After Your Period

Suppose you have menstrual problems that are not alleviated by standard treatment. In that case your condition may get worse if you remain on the same dose or schedule.

Absorbent pads designed for nighttime use, like those available at most drug stores and supermarkets, can benefit women who have heavy periods or are concerned about bleeding overnight. For women worried about staining their mattresses, a mattress pad or cover might provide comfort.

If PMS symptoms have disappeared, you have a second chance to focus on healthy sleep practices that can help you get better rest and avoid disruptions before and during your period.

This article discussed PMS and insomnia. PMS, otherwise known as premenstrual syndrome, is a hormone involved in circadian rhythm and regular sleep habits. PMS can cause anxiety and sadness, both of which are linked to sleeping difficulties. PMS before menstruation affects women’s sleep. They have less rapid eye movement (REM) sleep during the late luteal phase.

REM sleep phase is characterized by increased brain activity and is associated with vivid dreams. Depression rates in PMDD literature differ from study to study. Light therapy alters the circadian rhythm, which might help some PMDD sufferers with disrupted sleeping hours or mood swings causing difficulty in sleeping.